As a little yuletide treat for one and all, a couple of cover images for forthcoming titles.

First off, here’s how the cover of Warsuit 1.0, my new book for teens, is going to look.  It’s pretty self-explanatory, I feel.  Big-ass weaponised robot suit.  Jumpsuited terrorist bad guys peppering it with ray-gun fire. 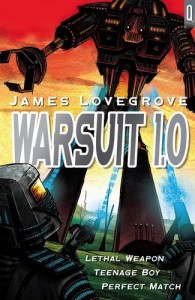 What you will have to imagine is the foil enhancement.  Basically, wherever you see plain white or grey, there’ll be foil.  So that’s the book title, my name and the Warsuit’s eyes.

Now, how about an excerpt from the back-cover text?

Armed and dangerous, Od is trapped in a desperate race to save his father’s life, battling the terrorists who want his secrets, the government who want their Warsuit back, and a viciously beautiful Secret Service operative known only as Angelica W-K…

‘Nuff said.  Out in March.  Order your copy now!

And this one is from the US edition of Kill Swap.  Barrington Stoke, the publisher, have recently signed a distribution deal in the States, and Kill Swap is one of the first contingent of titles from their backlist that’ll be available over there. 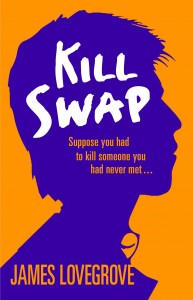 I think this is a very cool-looking image.  There’s been some to-ing and fro-ing over the level of gun references on the cover.  Guns and teens, after all, are not a good mix.  However, the inclusion of a semiautomatic in the image is fairly subtle and, in my humble opinion, works pretty well.