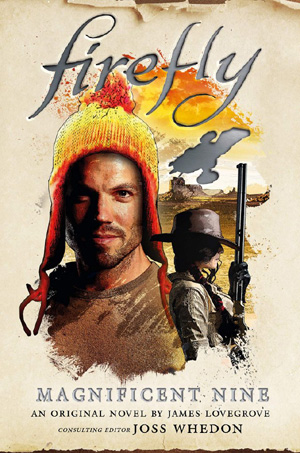 Produced with Joss Whedon as consulting editor, The Magnificent Nine is the second original Firefly novel, set towards the end of the TV series.

An old flame of Jayne Cobb’s, Temperance McCloud, sends a message to Serenity, begging him for help. She lives on the arid, far-flung world of Thetis, and bandits are trying to overrun her town to gain control of their water supply: the only thing standing between its people and dustbowl ruin. Jayne tries to persuade the Serenity crew to join the fight, but it is only when he offers Vera, his favorite gun, as collateral that Mal realises he’s serious.

When the Serenity crew land at a hardscrabble desert outpost called Coogan’s Bluff, they discover two things: an outlaw gang with an almost fanatical devotion to their leader who will stop at nothing to get what they want, and that Temperance is singlehandedly raising a teenage daughter, born less than a year after Temperance and Jayne broke up. A daughter by the name of Jane McCloud…