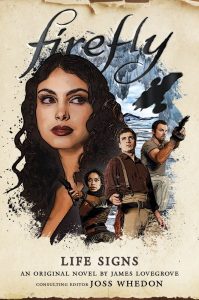 The fourth original novel tying into the critically acclaimed and much-missed Firefly series from creator Joss Whedon.
Some months after Inara leaves Serenity, Mal and the crew learn the reason for her sudden departure: she is dying of a terminal illness. It is Kiehl’s Myeloma, a rare form of blood cancer that’s supposedly incurable. Through their shock and despair, they learn that there are rumors of a scientist believed to have developed a cure for her condition, but he has been disgraced: incarcerated for life on notorious Alliance prison planet Atata. Here, terraforming did not take properly, so the world is a frozen wasteland. Inmates are abandoned there with no guards and left to survive as best they can. To save Inara, the Serenity crew must infiltrate the prison…