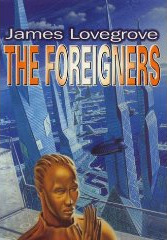 (Parry and his lieutenant, Pål Johansen, begin their investigations into the strange deaths of a Siren and a Foreigner.)

Armed with hardcopies of a morgue-slab head-and-shoulders photograph of the dead Siren, Parry and Johansen cruised the sites where Sirens were wont to gather of an evening.

At the Medina Maroc, no one recognised the face in the picture, which Erraji had cleaned up and composed so that now the dead young man looked merely as if he were fast asleep.

Likewise at the Place des Fontaines, no one could be found who claimed acquaintance with the young man. Parry and Johansen showed the picture to Sirens who were sitting perched on the rims of the basins of the plaza’s eponymous fountains, where the air was cooled by the action of water tumbling and splashing in cascades and shallow rippling rills over inner-illuminated crystech boulders. One after another the Sirens denied having ever seen or met anyone even resembling the man in the photograph.

At St Cecilia’s Square the story was repeated. None of the occupants of the tables of the cafés and bars that lined the square’s periphery could help. Whenever there was a language barrier to be circumvented, Parry and Johansen had only to present the photograph and solicitously form the hand-symbol for ENTREATY. It made no difference. In reply, all they got was the silent Esperanto of shrugs and shaken heads.

At the Weillplatz, Johansen thought he had struck lucky when a fellow Scandinavian, a slim Swede of roughly the same age as the dead Siren, seemed convinced that the young man in the picture was a resident of the hotel at which he himself was staying. However, when the Swede fetched a friend and compatriot with whom he shared a room and showed him the picture, the other Swede said that he knew the man his room-mate was talking about and that he bore no more than a passing likeness to the person in the photograph. Shorter, fatter, broader – only the hair and the colouring were the same.

It was close to ten o’clock when Parry and Johansen pulled up alongside what they fully expected to be their last port of call that evening, the Esplanade of Glass. Sirensong was due to begin at any moment, and once it was under way they would have little chance of obtaining a useful response to their enquiries.

While Johansen tethered the launch to an FPP-only mooring post, Parry leapt nimbly ashore and climbed the steps to the esplanade. With Sirensong so close, the atmosphere here was one of jittery carnival, both festive and restive. People, many of them in costumes or in national dress (or a parody thereof), milled about, greeting, talking, laughing, but at the same time warily eyeing up the competition. Waiters scurried. Bottle necks clinked against the rims of tumblers and wineglasses. Cappuccino machines coughed and spluttered. The occasional aromatic waft of marijuana smoke reached Parry’s nostrils, and an old instinct, no longer valid, had to be suppressed. Here and there voices could be heard warming up, running through scales and arpeggios that sounded like rising and falling chants of self-assertion, egocentric mantras of me-me-me me-me-me meee. Taxi-gondolas thronged the canal, dropping off fare after fare, and a handful of FPP officers present were busy ushering tourists away from the scene. The tourists, hoping to capture Sirensong with their cameras and palmcorders, were reluctant to leave, but could not hold out long in the face of reason and reasonability, the two main weapons of the FPP.

Parry set to working his way through the crowd, accosting everyone he could, loners, pairs, groups, showing the photograph and asking over and over whether anyone knew the man in it. Johansen did the same, moving in the opposite direction from Parry so that they could cover as much ground as possible in the scant time that remained to them. None of the Sirens was so incautious or impolite as to shrink away when approached by an FPP officer, and each took an obligingly long and careful look at the picture, but it was obvious that their minds were on other things, and this, coupled with the habitual guardedness of many Sirens towards the FPP, meant that neither Parry nor Johansen believed they were going to have any more success here than they had had at their four previous destinations. Even if someone did recognise the dead man, it was unlikely that he or she was going to admit it, not now, not with Foreigners imminent. Who in their right mind was going to risk missing out on an evening’s work because they had been stuck talking to the Foreign Policy Police when the Foreigners showed up?

Still the two men persevered, feeling it was better to try and fail than simply not try at all. And in the end, much to Parry’s surprise, their persistence was rewarded.

The Esplanade of Glass took its name from the crystech sculptures positioned at intervals across its length and breadth. Modelled on the minimalist principle of reiterative musical motifs, the sculptures consisted of hexagonal columns of transparent crystal that were arranged in rows and tiers and, like the fountains of the Place des Fontaines, lit from beneath so that they glowed. Although all apparently identical, each of the rows of columns was subtly distinct. The gradations in height differed minutely from one to the next, and the stepped parabola each described was unique. Grown into shape by means of pure sound, crafted through tonality and frequency, the sculptures were proof of the versatility of crystech as an architectural material. Its applications could be immense and functional, as when it was providing foundations for construction or forging bridges between islands or fashioning mid-air walkways between the upper floors of buildings in waterlogged cities, but they could be small-scale and aesthetic, too.

It was a castrato standing next to one of these sculptures who at last put a name to the dead Siren’s face.

“That’s Daryl,” the castrato said. “Daryl … Anderson, I think his surname is. No, Henderson. That’s it. Daryl Henderson.”

The castrato nodded. He was a Scot, pale-skinned, shaven-scalped, soft with fat. A plethora of piercings glinted around his head. Mascara made black stars of his eyelashes. A tongue-stud flickered as he spoke. “Aye.” He squinted at the picture again. “Definitely him. He’s an Aussie. Nice fellow. I saw him just the other night, actually, over at St Cecilia’s.”

“The other night? Can you be a bit more specific? Might it have been last night by any chance?”

“No. No. Couple of nights ago at least. Maybe three.” The castrato flicked a glance over Parry’s shoulder. No Foreigners coming. “Aye, three nights ago.”

“No, but it would help me greatly if you did.”

“Only, I don’t want to end up on the Siren register just ’cause I was doing you a favour, you know, helping out.”

“You have my word that won’t happen.”

Parry had out a pencil and his small spiral-bound notebook, two items of stationery he had constantly carried with him since his early days as a junior constable in the Met. He had already jotted down the dead Siren’s name. Now he made a note of the castrato’s, adding after it “Falsetto?” He crossed the word out. Dillon’s speaking voice sounded authentically raspy and high-pitched, and genuine castrati did tend to run to fat. Not only that, but another, more irrefutable proof of surgical subtraction floated in formaldehyde in a hermetically-sealed glass jar that hung on a chain around Dillon’s neck. Falsetti trying to pass themselves off as castrati used skilfully-crafted rubber replicas, but the pallid, shrivelled, preserved testicles in Dillon’s jar looked real to Parry. All too wince-inducingly real.

“And you know this Henderson well?” he asked.

“I know him to talk to. We were at the Conservatorio together. Different classes, though. He was a bass-baritone.”

“And when you met him the other night, how did he seem to you?”

“His behaviour. His attitude.”

“Oh. Normal, I suppose. We didn’t have a chat as such. Just hello, how’s it going, that type of thing. That’s all.”

“You wouldn’t happen to know where he was staying in New Venice?”

“No idea.” Dillon checked over Parry’s shoulder again. Then a thought occurred to him. “Hang on a second. Shit.” He examined the picture, then peered up at Parry. “‘Was staying’. The poor wee bastard’s dead, isn’t he?”

Not all of the Sirens to whom Parry and Johansen had so far shown the photograph had spotted this. To the ones that had, the two FPP officers had given the explanation that Parry now gave to Dillon. “We found his body this morning. We believe he may have met with an accident. We couldn’t identify him, so that’s why we’ve been asking around.” A lie, yes, but Quesnel had stipulated that the incident at the Amadeus was to kept out of the public domain for the time being, and Parry could understand her reasoning. The prepenultimate of the nine measures of the Foreign Policy Constitution stated that Openness and accountability for all its actions shall be among the avowed aims of the Foreign Policy Police, and in all dealings with humans and Foreigners its officers shall be wholly honest and without evasion, except in those circumstances in which it is deemed either by a senior officer or by the Council that the public interest is better served by the suppression of certain information until such time as said information may safely be revealed without fear of causing prejudice or concern and regardless upon the expiry of a period of 60 (sixty) days after said information is originally discovered. In other words, a small white lie was permissible if it was for the greater good, which in this instance it surely was.

“I’m sorry to have had to break the bad news.”

“Not your fault. He wasn’t like a friend or anything. It’s just, well … someone you know, you know?”

“I understand. One last thing. Can you tell me where you’re staying? I don’t think it’s very likely but I may need to contact you again.”

“I’m at the…” Dillon hooked his thumbs together with his hands twisted away from each other, forming the S-like configuration for EXCELLENCE, which a certain Japanese megacorporation had co-opted as its company logo.

Parry wrote down “Shibata Excelsior” and connected the words with an arrow to Dillon’s name.

“Thank you very much for your help, Mr Dillon,” he said, shutting and stowing away the notebook.

Dillon broke off. A thrill was running through the crowd like an electric current. Conversations were petering out, joints and cigarettes were being stubbed out, cups and glasses drained. Everyone was looking towards the canal’s edge, craning their necks for a glimpse.