… because I have not updated this website in quite a while.  To be honest, I do most of my news-announcing and humblebragging on Facebook these days, and you’re welcome to friend me if you like, using this link.  My FB page is a combination of self-promotion, random thoughts, pet pics, funny shit my kids say, and whatever else catches my fancy on any given day.

But here we are, on my site, so I ought to keep you all in the loop about my various forthcoming projects.  Seems rude not to.

First off, I have a new Sherlock Holmes out in August.  It’s called The Thinking Engine, and the cover looks something like this: 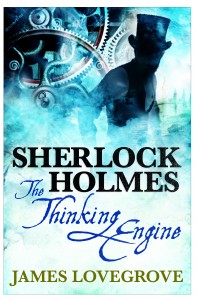 Nice, huh?  And here’s the blurb: “March 1895, and at Oxford University, a Professor Quantock claims he has built a computational device capable of analytical thought to rival Sherlock Holmes. Sherlock cannot ignore the challenge, and he and Watson travel to Oxford, where a battle of wits ensues. But it soon becomes clear that the Thinking Engine has its own agenda. The companions’ lives are on the line as a ghost from the past catches up with them…”

Next up is the first volume in a trilogy for Titan Books pitting Sherlock Holmes — him again — against creatures from H.P. Lovecraft’s Cthulhu mythos.  The series as a whole is called Cthulhu Casebooks, and the individual instalments are, in order, The Shadwell Shadows, The Miskatonic Monstrosities and The Sussex Sea-Devils.  I believe The Shadwell Shadows is going to be published this December, and I’ve already been given some idea, by super editor Miranda Jewess, of how the covers are going to look.  I can’t tell you much more about them yet, but trust me, they’re going to be IMMENSE.

Also out this year, courtesy of that nice Ian Whates at New Con Press, is a collection of my journalism.  I’ve been reviewing and critiquing for a couple of a decades in periodicals ranging from The Literary Review to Interzone to The Financial Times to Comic Heroes, and the book is a selection from the reams of material I’ve accumulated in that time.  If you want to know my opinion on many a well-known SF novel, and a few obscure ones besides, this is the place to find out.  If you want to learn a bit about apocalyptic fiction or Colin Wilson or Sherlock Holmes comics, look no further.  If you’re curious about the various forewords I’ve written — for Adam Roberts’s Jupiter Magnified, to name but one, or Stephen King’s Carrie, to name but another — walk right in.  If you’d like to read the hatchet-job review that notoriously broke a website, it’s here.  Lifelines and Deadlines (for that is the name of this memorable tome) is out in late summer/early autumn.

Last but not least, the second of my Dev Harmer books, World Of Water, will be seeing the light of day in early 2016.  It’ll be ensconced behind this typically excellent cover image from Jake Murray (below). 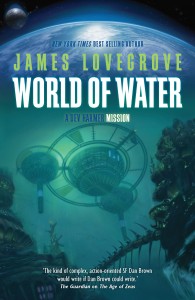 Blurbage goes thus: “Dev Harmer, reluctant agent of Interstellar Security Solutions, has travelled to ocean world Robinson D, nicknamed Triton.  Here, settlements belonging to the Terran Diaspora have been coming under attack by members of the planet’s subaquatic indigenous race.  ISS suspects the involvement of an agent provocateur working for humankind’s galactic rivals, the artificial intelligence civilisation known as Polis+.  As the violence escalates, Dev finds himself battling to restore order, and it is a race against time.  He has only seventy-two hours before his genetically engineered host form breaks down irreversibly.  And an ancient god-beast is rising from the depths to usher in an apocalypse…”  Be sure to check it out.

I have one further item of exciting news, but for one reason and another I’m not at liberty to share it right now.  Soon, though.  Soon…

And there we have it.  Th-th-that’s all, folks, for now.  I promise I won’t leave it so long next time.