I thought I would share this image with you, taken by Orion’s lovely Sara Mulryan at Interaction in Glasgow last weekend: 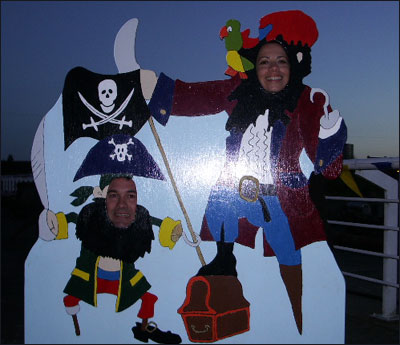 It shows Lou (Mrs Lovegrove) and a certain other fellow pretending to be pirates in one of those wooden seaside-cutout thingies (actually located next to the Clyde, close to the tall ship aboard which the Voyager imprint’s convention party was being held). To avoid embarrassing the bestselling SF-noir novelist in question, I shan’t name him. I can tell you that he isn’t two feet tall in real life and that publishing this pic on my site may just wake his furies and that, if he were willing to cough up enough cash, market forces might compel me to take the image down again, although I doubt it. Heh heh heh.

The convention itself was great fun and I only wish I could have stayed longer than two days and had had a chance to explore some of Glasgow itself instead of being stuck in one small area on the outskirts next to the SECC exhibition centre. Maybe next time, at EasterCon.

As it was, I did some panels and readings, met up with old friends, stayed up horribly late, drank too much, and generally did all the things which, for the sake of one’s health and sanity, one shouldn’t do when one is pushing 40.

I was very pleased to meet a new Gollancz writer, Robert Scott, whose first novel, The Hickory Staff, I am immensely looking forward to reading. Robert’s an American but he definitely gets the British sense of humour. He also had a bunch of us playing a Spot-The-Lie game which led to us learning lots of worrying new facts about people we thought we knew well (and trusted). Like, did you know that rugged, handsome, vigorously heterosexual fantasy writer M*** C******** has snogged Elton John? And bestselling SF-noir novelist R****** M*****, when he’s not pretending to be a two-foot-tall pirate, relishes the fact that he was once sexually assaulted by two female work colleagues? And epic heroic fantasy specialist J**** B****** has slept with someone who slept with Steven Berkoff? I do now, and wish I didn’t.

One of Robert Scott’s truths, incidentally, is that he once composed a song in honour of his own penis. But then, let’s be honest, we’ve all done that at one time or other, haven’t we?