Sherlock Holmes and the Three Winter Terrors is now available.

Physical copies of the hardcover can be purchased in bricks-and-mortar bookstores, and also online at:

The ebook edition may be purchased via the usual outlets.

Here’s a wonderfully atmospheric short trailer for Three Winter Terrors, put together by the talented folk of the marketing department at Titan Books:

Please feel free to Share:
The Waterstones exclusive edition of Sherlock Holmes and the Three Winter Terrors (with sprayed gold edges) is now available for preorder. 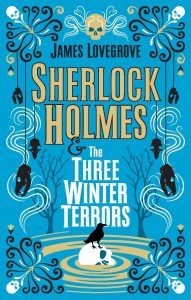 I was asked by the Guardian to comment on the dismissal of the lawsuit brought by the Conan Doyle estate against Netflix and everyone else responsible for the Enola Holmes movie.

I think I show my grasp of complex legal proceedings through my use of the phrase “a complete prick”.

Looking for Christmas gifts for the mystery-lover in your life? Titan Books have a few suggestions, including a couple of familiar-looking Sherlock Holmes novels…

And if you’d like to know a bit more about those books, and their author, FPTV have a video interview for you.

Lots of reviews of The Beast of the Stapletons are appearing, and all positive, but this one is my favourite so far.

I’ve just recorded a podcast with James and Sam at Squaregroot. They are lovely gents and it was an enjoyable and wide-ranging discussion, focusing largely on my Firefly tie-in novels but also on my Sherlock Holmes books and the Cthulhu Casebooks.

You can listen to it here or here.

Cover reveal for Firefly: Life Signs, due out sometime in 2021.

A splendidly shiny design job once again by Natasha MacKenzie.