The MMPBs (mass-market paperbacks) of Provender Gleed have arrived, and the official verdict is … hmmm.

Outwardly they’re fine. The cover is a slight development on the hardback and trade paperback cover, with a nice review quote from the lovely Johnny Berlyne prominently positioned.

Inside, however, is disappointing, to say the least. No further review quotes on the flyleaf (even though there were plenty to choose from), but worse than that, the text has been set in a teeny-tiny font size pushed right to the edges of the page, with margins that can be measured in micrometres. The word “unreadable” springs to mind. As does “amateurish”.

I am pretty peeved about this, as you may be able to tell, and have expressed my views to Gollancz, whose response has been to admit that someone goofed but without specifying whom or how. All I can say is, poor production values aside, it remains a terrific novel and well worth recommending to friends, family and nodding acquaintances. It’s just not, alas, a terrific edition.

On a brighter note, I’ve contributed a second comics nostalgia piece to Forbidden Planet’s website. It may be found on The Forbidden Planet Blog and I’d like to thank FP blogging-supremo Joe Gordon for giving me the opportunity to wallow once again in the cheaply printed pleasures of my youth.

Joe also supplied me with this photograph: 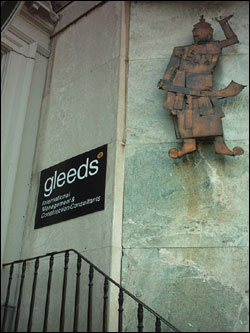 It’s an office he passes every day on his way to work. Clearly the Gleed Family’s power and influence is such that it reaches even into the real world.

I’ve written another short article, on the subject of wordplay in fiction (my own and others’), for issue #3 of the BBC’s MindGames magazine. It should be on shop shelves imminently, if it isn’t there already. Inevitably, the piece isn’t only about wordplay but contains wordplay. Well, what would be the point otherwise?

Our second child is due to arrive any minute now, so a noisy and hectic few weeks lie ahead. I’ve wound down the writing for the time being, but I don’t anticipate that my pen will be lying idle for long.

And finally, our house is on the market. Lou and I have decided that our rural idyll has come to an end and it’s time to return to the busier and more populous climes of East Sussex. We love living in north Devon but the travel links are proving problematic and I need to be up in London more frequently than I can manage. We hope to be elsewhere by the end of the year. Although, looking at the sere savannah that the Home Counties have become this summer, compared with the verdant lushness of the south-west, where hosepipe bans are the stuff of fantasy, you have to wonder if we’re not a little bit crazy…