The baby arrived safely at just past three on the afternoon of July 27th, and has been named Theodore Finch Xavier Lovegrove, Theo for short. The “Finch” part is in tribute to Atticus Finch, To Kill A Mockingbird being Lou’s favourite book and its hero her ideal of a Good Man (other than me, of course), while the “Xavier” part is one of Lou’s family names … although there may be a sly X-Men reference in there too. And I’ve always thought it would be cool to have X as one of your initials. As for Theo, we both just thought it a nice name, and it seems to suit him.

He’s been a very well-behaved baby so far, if well-behaved is another way of saying sleeps a lot, which he does, as this pic would seem to demonstrate. His mother, meanwhile, is recovering slowly but surely, and as for his brother … well, Monty’s a bit nonplussed by the whole event, but he did enjoy the slew of gifts he received in the wake of the birth and has taken to asking for “more presents” on a more-or-less hourly basis. I’m sure he’ll warm to the idea of gaining a smaller brother once he appreciates that he now has a playmate / helper / minion / victim to use and abuse as he sees fit.

Me? I’m tired but OK. And secretly, I’m rather looking forward to getting back to work. But don’t tell the missus. 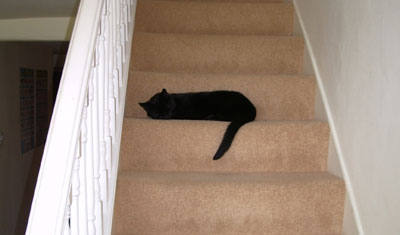