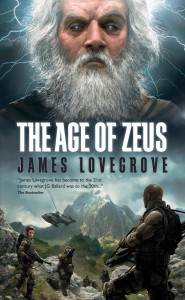 Here’s the cover image to be used on The Age Of Zeus.  I think you’ll agree that Mr Marek Okon has knocked it out of the park again.

What isn’t clear on the mock-up as is, is that there’s a Greek temple atop the mountain peak.  At the moment it’s hidden beneath the Bookseller quote, but I’ve been assured that the typesetting will be sorted out so that the temple is there, clear for all to see, on the finished article.

Also, the title will be embossed, which is cool.

Great series style been developed for these Pantheon books.  Can’t wait to see what Marek comes up with for The Age Of Odin.

Right, deep breath, here we go.  My first effort at posting, unaided, unsupported by webguy, stepping out onto the tightrope on my own, arms outstretched, wobbling a little, oh God it’s a long way down…

Busy year ahead, with no fewer than eight new books due out.  First up is the first volume of The 5 Lords Of Pain, which will appear in February.  Barrington Stoke are producing a microsite for the series, and I will be posting a link there as soon as it comes online.

To promote the books I am going to be doing several appearances at schools and libraries, most notably in mid-February at the  Bounce Into Books  festival in Yorkshire/Humberside.

Then in April it’s The Age Of Zeus, and already I know I’m going to be recording a podcast for that with the fine folks at Rebellion/Solaris.  This book is a whopper, by the way.  700 pages of epic, myth-tinged mayhem.  I’ve said it before, I’ll say it again: The Dirty Dozen, with gods and power armour.  What more could you want?

Around about the same time, PS Publishing will be putting out my second short story collection, Diversifications.  I’ve been in discussions with Pete Crowther about the jacket, and it’s going to look good.  I’ll post up an image soon as I have one.

There’s more to say, but this’ll have to do for now.  Vertigo’s setting in, and I don’t see any safety net below.