Reviews are coming in for Firefly: The Magnificent Nine, and everyone seems happy.

Here’s one at The Dream Cage, here’s another at Set the Tape, and yet another at Starburst.

There’s also this interview at Fantastic Books and Where to Find Them with me about the book. 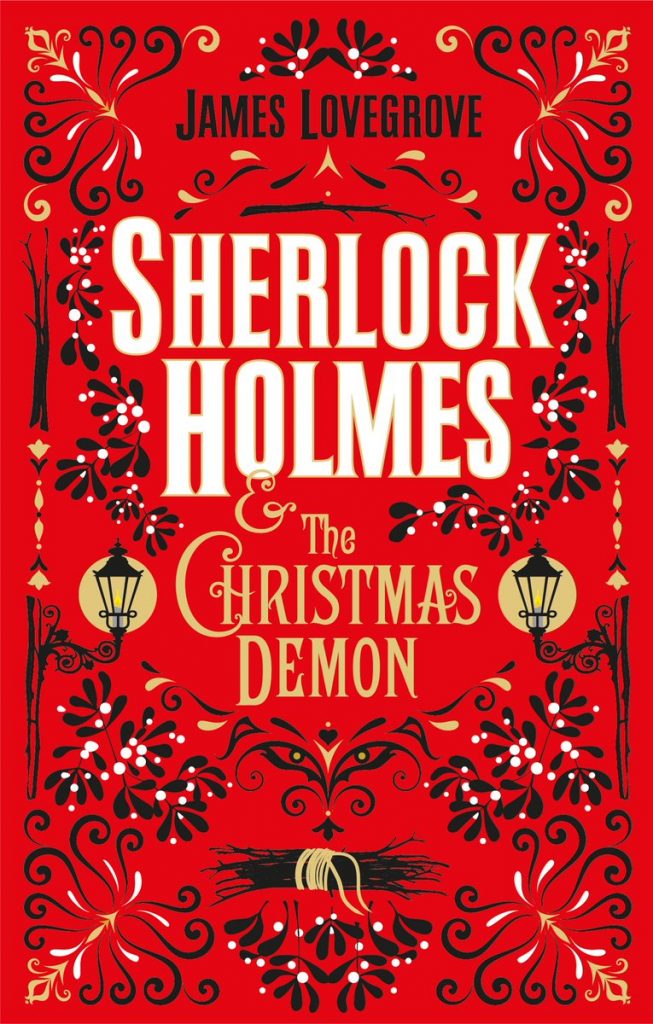 Here it is, the wonderful cover design for Sherlock Holmes and the Christmas Demon, courtesy of the equally wonderful Julia Lloyd at Titan Books. Festive and sinister all at once. There’s even a creepy face staring out at you, if you can spot it.

The novel is due to be published in October. And if you’re wondering why there’s a bundle of twigs tied up with string just below the title… Well, you’re going to have to read the book to find out what it signifies.

The third and final volume in the Cthulhu Casebooks trilogy is out today in a handsome hardback to match its two forerunners. Sherlock Holmes and loyal Dr Watson valiantly confront the force of eldritch evil one last time. 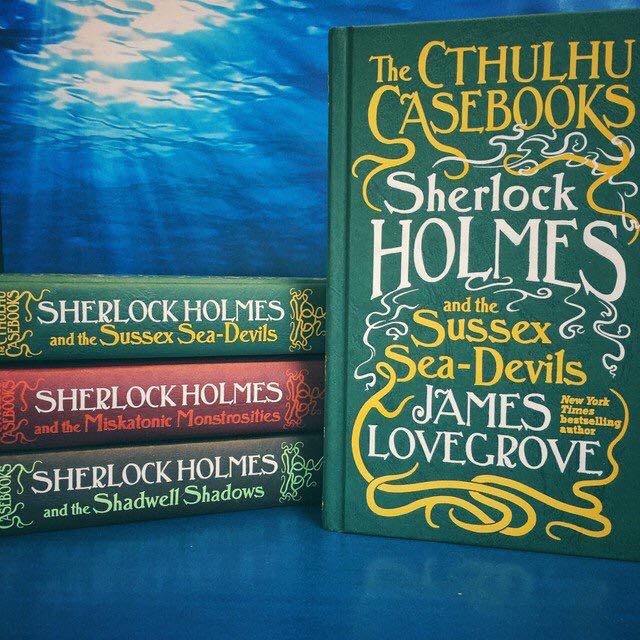 If you can’t wait to read my first Firefly tie-in novel Big Damn Hero (out November 20th) here’s an excerpt to whet your appetite.

As some of you may know, I was asked by Titan Books if I would be willing to write a Firefly tie-in novel. You know, Firefly. The Joss Whedon show (and movie). The one with the space cowboys and the deliriously delicious dialogue and superbly-drawn characters.

It so happens that I mentioned to my editor Miranda Jewess a couple of years ago that the only licensed property I would be interested in writing for was Firefly. She remembered this, and when Titan got the licence to produce Firefly tie-in fiction, she very kindly (and wisely) called me.

The result is that I now have not one but two Firefly novels ready to go.

The first is Big Damn Hero, and it’s based on a story by the esteemed Nancy Holder, who was herself unable to complete the book for various reasons. It’s a rollicking tale of kidnap and revenge as the sins of Mal Reynolds’s youth catch up with him. It’s out in November.

The second is The Magnificent Nine, in which Jayne Cobb is contacted by an old flame, Temperance McCloud, asking for his assistance against bandits who are attacking her hometown. In it, I indulge in just about every Western-movie trope imaginable. You may be able to gather as much from the title alone. It’s out in March.

I had a blast working on these books. It was so much fun, in fact, it was hardly work at all.

Both are available where all shiny books are sold. And there may be more to come…

To coincide with publication day for The Devil’s Dust, here’s a blog post I’ve written for Crime Reads about Sherlock Holmes and the supernatural, with reading list.

Sherlock Holmes Versus the Supernatural

A couple of links pertaining to Gaslight Gothic, a new collection of supernatural Sherlock Holmes adventures from EDGE Publishing. Not uncoincidentally, I have a story in it, “The Strange Case of Dr Sacker and Mr Hope”.

And here’s the first review of the anthology. You should, of course, read the whole piece, but I found the following excerpt rather pleasing, for the obvious reasons:

“It’s always a good sign when you see James Lovegrove attached to an anthology, and even moreso when it’s a Sherlock Holmes anthology. Mr. Lovegrove has written a number of Holmes novels and short stories and they have always been immensely enjoyable. In particular, he has been one of the few authors to try and bring back the ‘original’ Watson from the early Holmes canon, rather than the later simpleton; the Watsons to be found in his tales are always proactive rather than passive, fiercely independent and actually intelligent, rather than the canine-like ‘faithful companion’ that seems to be the default for most Holmes pastiches. He has also begun writing a series of novels that pits Holmes against the Lovecraftian Elder Gods and his story for this anthology, The Strange Case of Dr Sacker and Mr Hope, has a similarly occult, cosmic horror angle; taking inspiration from Conan Doyle’s original names for Holmes and Watson, he effortlessly weaves a bizarre, dream-like and hugely enjoyable tale that focuses on the conflicting dual natures of Holmes as a character, and what the consequences might be if one were allowed to reign supreme over the other. It has an ending that completely fooled me, taking Holmes and Watson down a very dark path that reminded me of Neil Gaiman’s A Study in Emerald, and is another stand-out story in the anthology.”

Here’s the very splendid cover for the paperback edition of Miskatonic Monstrosities, which will be available in all good bookstores (physical and online) in September. 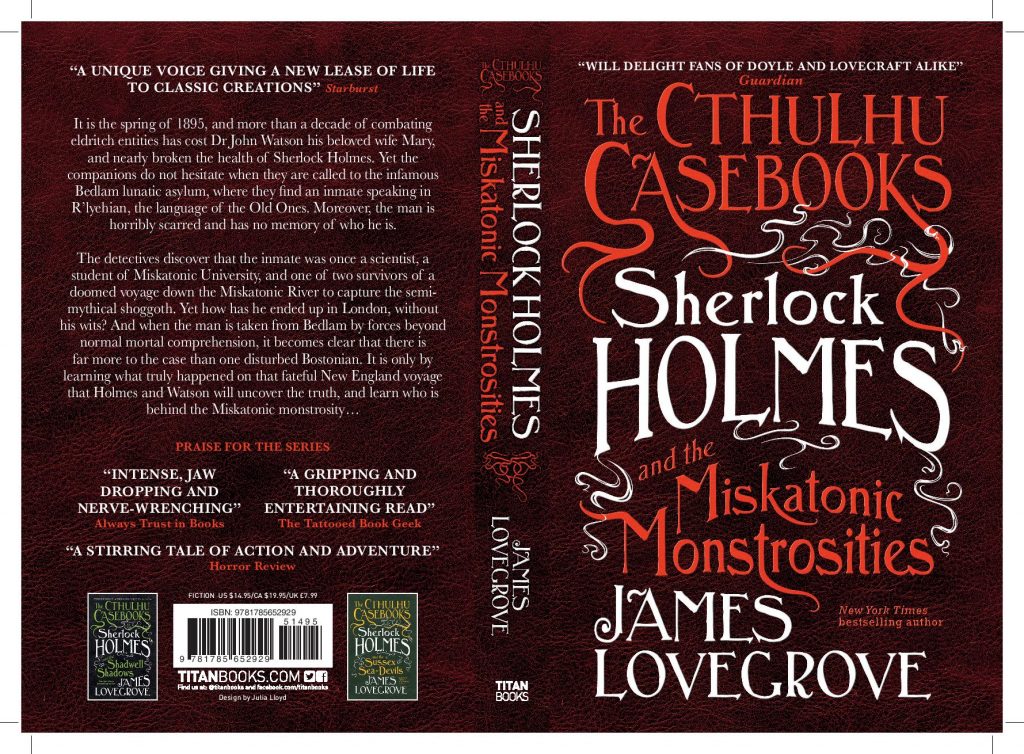 Voilà! Photographic evidence of brand new edition of Royaume Désuni, a.k.a. Untied Kingdom, now on sale in la belle France, courtesy of those excellent folks at Éditions Bragelonne. For a measly 10 euros, it’s vraiment a bargain. 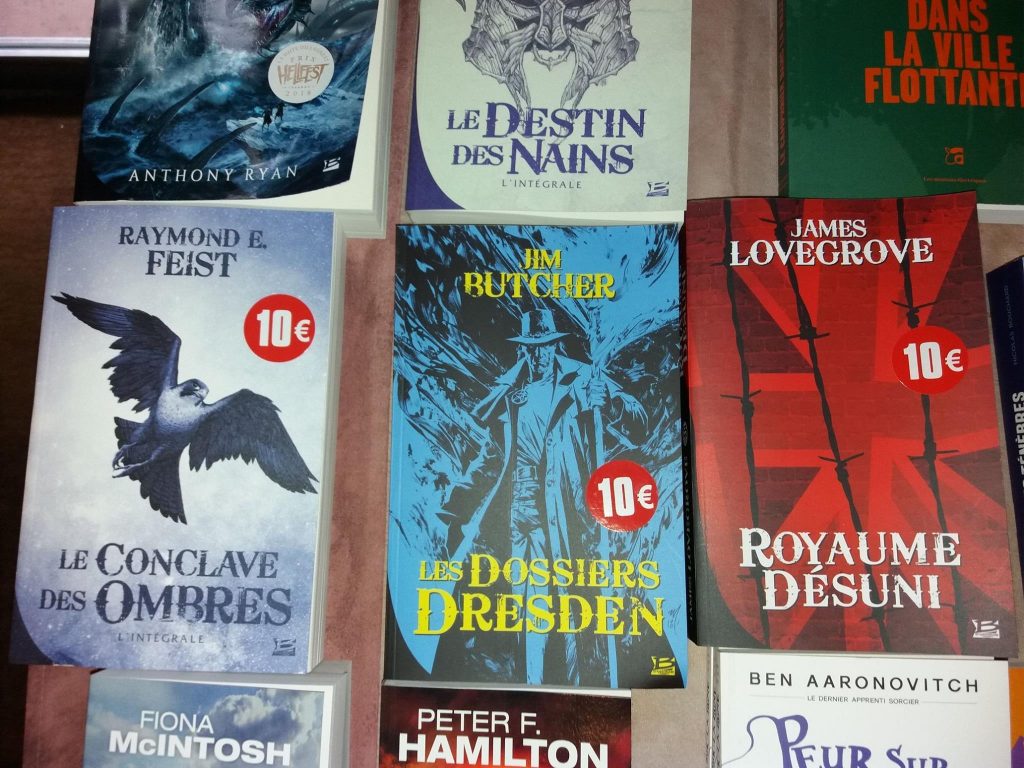