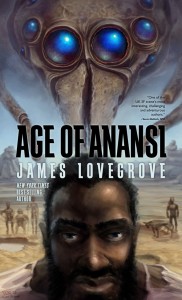 I may already have mentioned elsewhere (i.e. Facebook) that sales of the Pantheon series have now topped 100,000.  [Imagine enormous smiley face or other similar emoticon inserted here.]  I’m pretty happy about this, as you can imagine, and so are Solaris.  I know so because they sent me a lovely bottle of Champagne as a way of saying well done and thank you.  Here’s their press release on the subject.

What’s great isn’t just that the books are continuing to sell in respectable quantities, but that with at least two more on the horizon the figures can only continue to rise as the backlist gets hauled along in the slipstream of each new volume.

But enough of the self-congratulation.  Let’s get on with congratulating others, specifically Simon Parr, who has produced this draft of a cover for the Age Of Anansi novella.  It’s simple and understated but it does its job very well indeed, I think.  I can’t wait to see what it looks like when it’s finished.

Simon has also produced these two new cover images for the deep backlist.  Again, nice and restrained.   They’re for ebook-only release, and will be available to buy…  Well, I’m none too sure when.  But soon, I imagine. 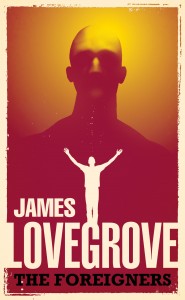 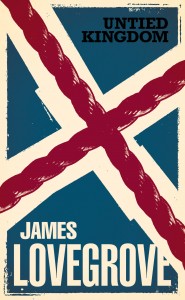 Finally, a few items for your must-purchase list. Warsuit 1.0 is out the beginning of next month (March) — robot-suit action for the SF-savvy teen in your life.  It’s closely followed by Age Of Aztec, which I’ve probably banged on about too much already (but it’s ace).  And you may also be interested, if you’ve a mind to such things, in Strange Divisions And Alien Territories, an anthology of essays on the subgenres of SF, which has been compiled and edited by Keith Brooke and which includes a piece by me on apocalyptic and post-apocalyptic SF.  That’s on sale right now and looks like a very interesting and scholarly read.  Even my contribution.  Yes, I can be erudite when I need to be.

All the links in the above paragraph are to Amazon, but of course other retail outlets, both high-street and online, are available.