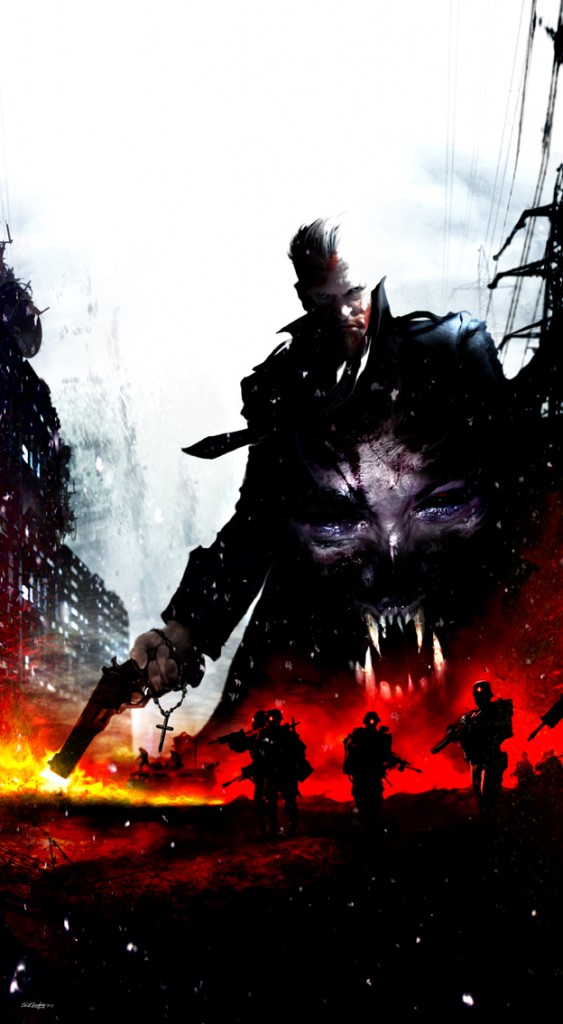 This has just come in, hot off the press, or hot off Clint Langley’s hard drive at any rate.  I’m trying to be cool and casual about it, you know, it’s a nice piece of artwork, does its job well, fits the brief perfectly…

Yes, I have turned into an American teenager.  And I’m not ready to turn back into a 40-something Englishman just yet.

There’s the snow.  The American cityscape.  The creepy- ugly vampire face.  The badass mofos in military gear.  And Redlaw looking even more badass than those badasses.  Like he could whup those badasses’ asses badly.

I share this with you all so that you may bathe in its bleak, radiant brilliance.

And now all I have to do, as ever, is make the book as good as I can, in order to match the cover.  And I haven’t even started writing it yet. 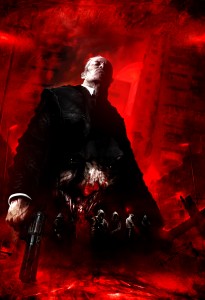 Nikola, as he ran, wished many things.

He wished he was faster. He wished he had wings. Above all he wished he had never strayed beyond the fence. They had warned him against it. Everyone had. Countless times. The fence, they had told him, is there for a reason. Not to keep us in. To keep them out. So do not go over it. Stay this side. It is dangerous out there for our kind.

Nikola had listened. But he hadn’t listened. He’d seen little of London since arriving on the ferry from mainland Europe. In fact, once he’d been discovered stowed away in the back of the articulated goods lorry, all he’d seen was a detention centre, the inside of a van, then the housing estate. He was sixteen, and he did not care for being confined.

So tonight he had scaled the fence. All but vaulted over it, in fact. It was not that high, four metres or thereabouts. The barbed wire had scraped his hands but drawn no blood. An easy escape. Everyone was right: the fence was a deterrent to the rest of the world, not to those inside it.

Gig, my palindromic flipbook rock novella of 2004, is back, bigger and better than before!!! 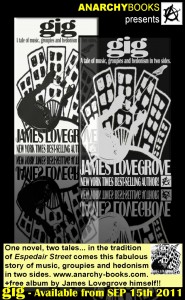 (Sorry.  Slipped into Stan’s Soapbox mode there for a moment.)

Previously released in mirror-image flipbook format by PS Publishing, and still available as such, the book is now being released in a brand spanking new ebook format by Angry Andy Remic’s Anarchy Books, and may be purchased from all the usual ebook outlets, i.e. Amazon, any time within the next couple of days onwards.

It’s a nice-looking product, and the text itself has been extensively rewritten, mainly to bring the content of the story up-to-date in this age of music downloads and YouTube (and also to sneak in a few new extra palindromes, because, well, why not?).

It’s also been enhanced, in the way that DVDs are enhanced with bonus material, by the addition of an album of music written and recorded especially for the project.  Written and recorded, I should add, by none other than me.  And yes, sung too.  Consider yourselves warned.

There are four songs and four instrumental pieces, and the album is available as a free download — yes, you heard that right, free, as in gratis, for nothing, without charge, on the house — from the Anarchy Books website.

I would urge you to seek out and obtain this wondrous item.  One isn’t supposed to say this about any particular book in one’s oeuvre, but Gig is a favourite of mine.  It was a pleasure to write from start to finish (and it isn’t every one of my novels I can say that about), and it’s also the book which came the closest in execution to the way I’d originally envisioned it.

The music’s pretty good too, even if I do say so myself.  And all this can be yours for a measly £2.98.  Well, what are you waiting for, True Believer?